Welcome to Ballpark Ratings!   My name is Cole Shoemaker, and this has been an ongoing project I have worked on during the tail end of the ballpark building boom, launching in 2012.  Ballparkratings.com scrutinizes all major league baseball stadiums and spring training ballparks to a degree never seen before, implementing a comprehensive ratings system based on setting, architecture, functionality, and amenities. This website also features a number of independent research articles that examine the debate (and my opinion) about the history of ballparks, the new wave of retro ballparks, design and architectural trends, the growing business of premium seating, and other logistical specifics: how does it reflect our evolving society from a macro perspective? Each ballpark features a photo gallery with 300+ photos, showcasing not only interior and exterior shots, but pictures that are more difficult to find on the internet, such as the concourses, club lounges, suites, concessions, restaurants, etc.  All photos are taken by me.  Ones without a watermark are just older.

While there is a “comments” section at the end of each specific ballpark review, please contact me at cole@ballparkratings.com or Facebook if you have any questions or comments.  Facebook may be quicker.  If you have a question about a specific ballpark, no matter how obscure, please ask!

Where to begin?  Start with our long-form piece ranking, rating, and briefly reviewing the current MLB ballparks all together.

COVID-19 caused the most significant disruption to sporting events since World War II, and baseball was no exception.

Now that we’re nearing the light at the end of the tunnel, I know I’m not the only one excited to experience live baseball once again.  I personally sensed an extra spark in the small crowds at spring training in 2021, with fans cheering a little louder for meaningless victories.

With all 30 teams allowing in fans for Opening Day and throughout the 2021 season (with one caveat: Toronto will open at their spring training site in Dunedin, FL), I look forward to revisiting MLB ballparks this summer when interest is at an all-time high!

We know that global pandemics change society and culture, shifting collective consciousness and reversing or accelerating preexisting trends. We know that such pandemics end, but we don’t know who we will be afterward. Some consequences may take years to manifest, some are quickly apparent. 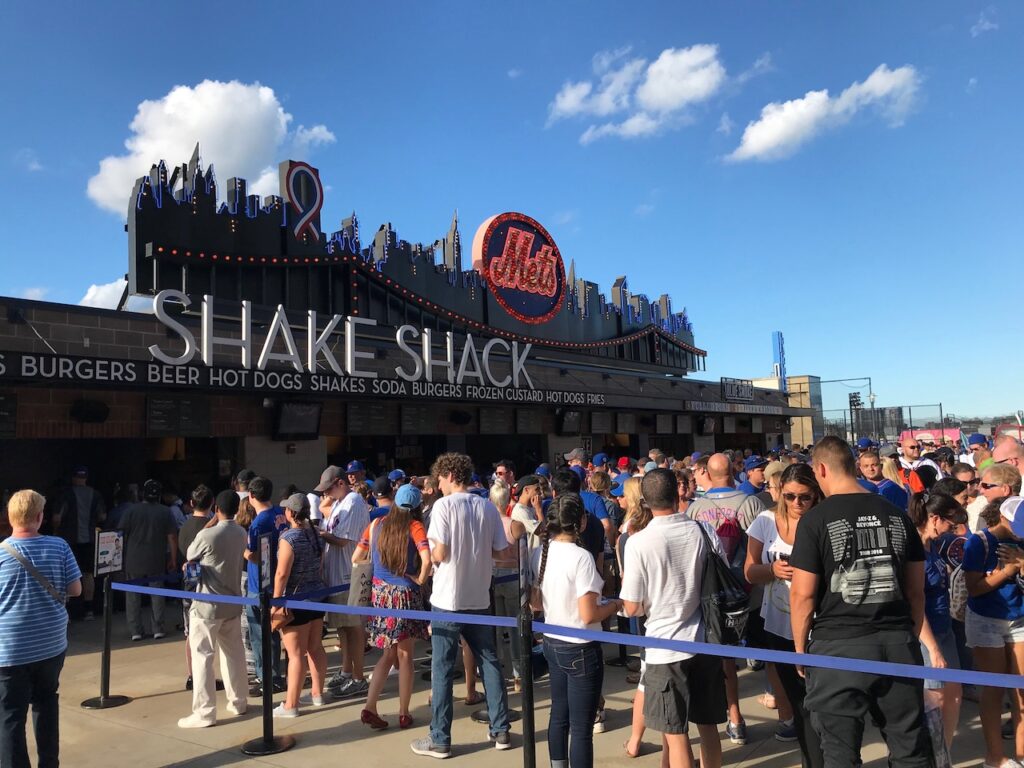 Missing a tasty day at the ballpark? Check out our guide and ranking of all 30 MLB stadiums based on food. During COVID-19, my goal was to document a part of the ballpark experience that may not be the same the foreseeable future, even when we can return. Let’s reminisce!

COVID-19 may also have lasting social consequences for the fan experience at ballparks, even after a vaccine is developed.  It’s hard to predict, but the way we attend games may permanently change.

___During the Pandemic, I felt compelled to write a piece that encapsulates a part of the Major League ballpark experience that may not be the same for the foreseeable future, even when we can return to ballparks.  I hope it doesn’t turn out to be a decade-long retrospective, but stadium cuisine was a defining element of the ballpark experience in the 2010s.  This is a detailed snapshot of MLB ballpark food pre-COVID.

–Best Foodie Ballparks: The Definitive Guide and Ranking of All 30 MLB Stadiums by Food

___Baseball is back, so our in-depth review of the Texas Rangers’ brand-new Globe Life Field has been released.

The review is based on an extensive exploration of the site, a tour of the ballpark, and an intimate knowledge of the planned gameday experience had the ballpark opened as originally expected.  However, because of the impossibility of actually gleaning anything close to the full “fan experience” during COVID times, I am not formally “rating” Globe Life Field.  I do provide a tentative ranking at the bottom.

While not completely lacking in redeeming qualities, Globe Life Field is ultimately a $1.2 billion failure of imagination and the most disappointing new Major League venue since New Comiskey Park in 1991.

Agree or disagree with my criticism, everyone can enjoy the photo gallery of 300+ images from all around the ballpark, including the interior, exterior, Texas Live!, concourses, concessions, premium clubs, suites, statues, other Rangers’ historical references, etc.

___As the last decade came to a close, we released a special feature on the trends that defined MLB ballparks in the 2010s.

From the advent of “social spaces” to the dawn of mixed-use development communities surrounding ballparks, enhancements were aimed at attracting nominal baseball fans to ballparks as destinations in their own right.

–Ballpark Trends in the 2010s: A Decade in Review

___During what was the 2020 “season,” I was very fortunate to catch a handful of early spring training games. 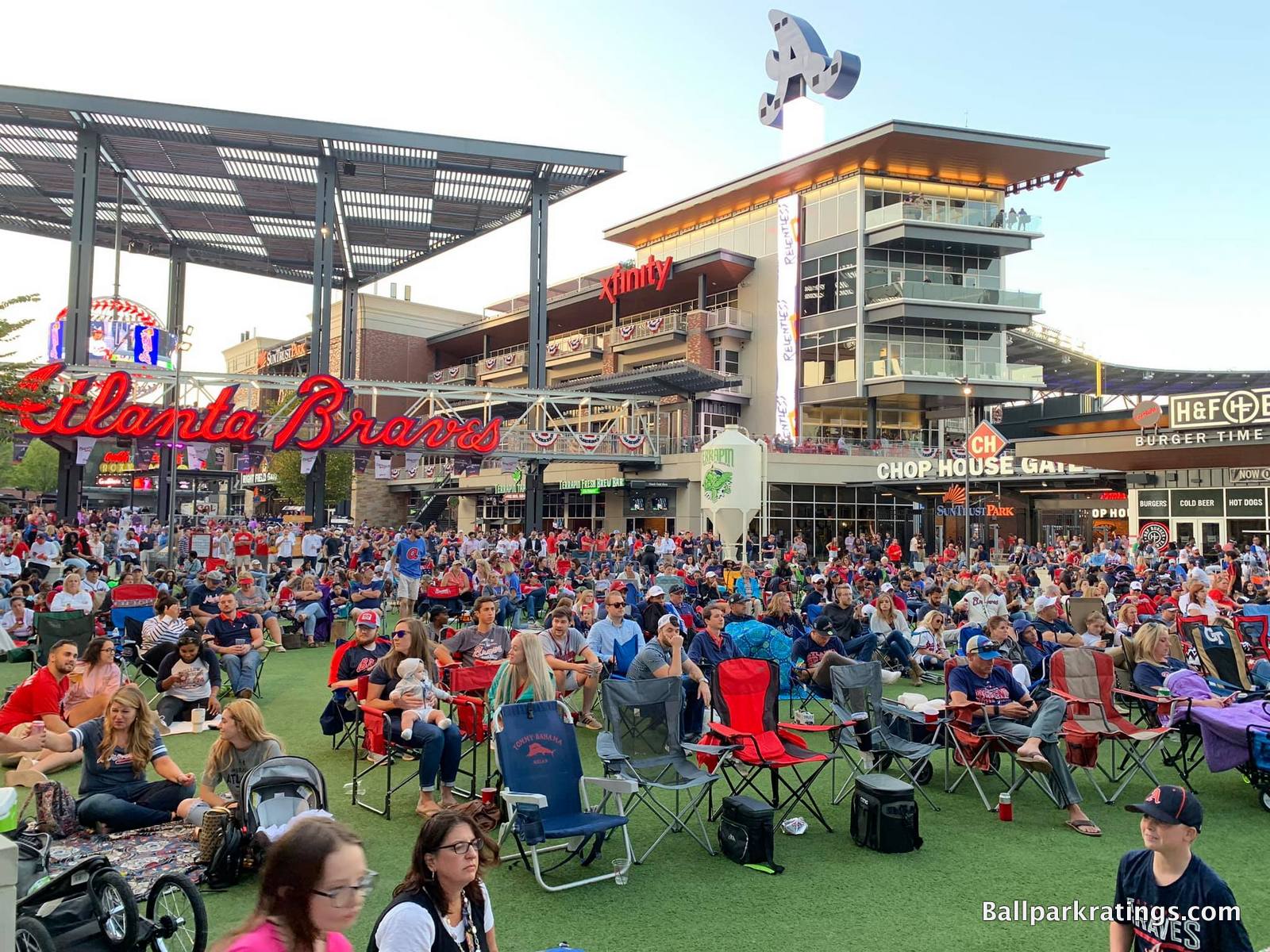 Welcome to the “ballpark experience” that defined the 2010s and will accelerate in the 2020s. Major League Baseball is trying to increase the pace of play on the field, but teams are also taking matters into their own hands by making the ballpark a standalone destination. Prime real estate at the Battery Atlanta at SunTrust Park shown here.

For 20 straight years, I almost always sought to cover a fair amount of ground in mid-March for spring training baseball, driving up and down the coasts in Florida or exploring both sides of the Valley in Phoenix. This year, I did things a bit differently.

For the first time, I was on hand for the inaugural slate of February games, in order to get a first look at a couple of ballpark renovations and some fairly significant games.

Here are the relevant ballparks we saw:

—–Saturday, February 22nd, 1:10: Marlins at Mets (ss), Clover Park, Port St. Lucie, FL.
First game at the New York Mets’ enhanced (and renamed) facility.  While the project wasn’t at the level of other renovated ballparks due to budget cuts (i.e. no 360-degree concourse), the re-envisioned Clover Park has a new exterior design, an expanded grand entrance, new seats, the new Jim Beam Bar in left field, and a widened main concourse.  Memorable nods to Mets’ history are the highlight.

—–Sunday, February 23rd, 1:05: Tigers (ss) at Braves, CoolToday Park, North Port, FL
After over 20 years at Disney World, the Atlanta Braves began their first full spring at the new CoolToday Park.  Only one game was played here in 2019, so I enjoyed seeing the ballpark operation in full swing at the beginning of 2020.

___We enjoyed our trip, and have now released the updated 2020 piece ranking, rating, and reviewing all spring parks!  Renovated TD Ballpark, enhanced Clover Park, and new CoolToday Park are included.  See how they did!  Here it is: 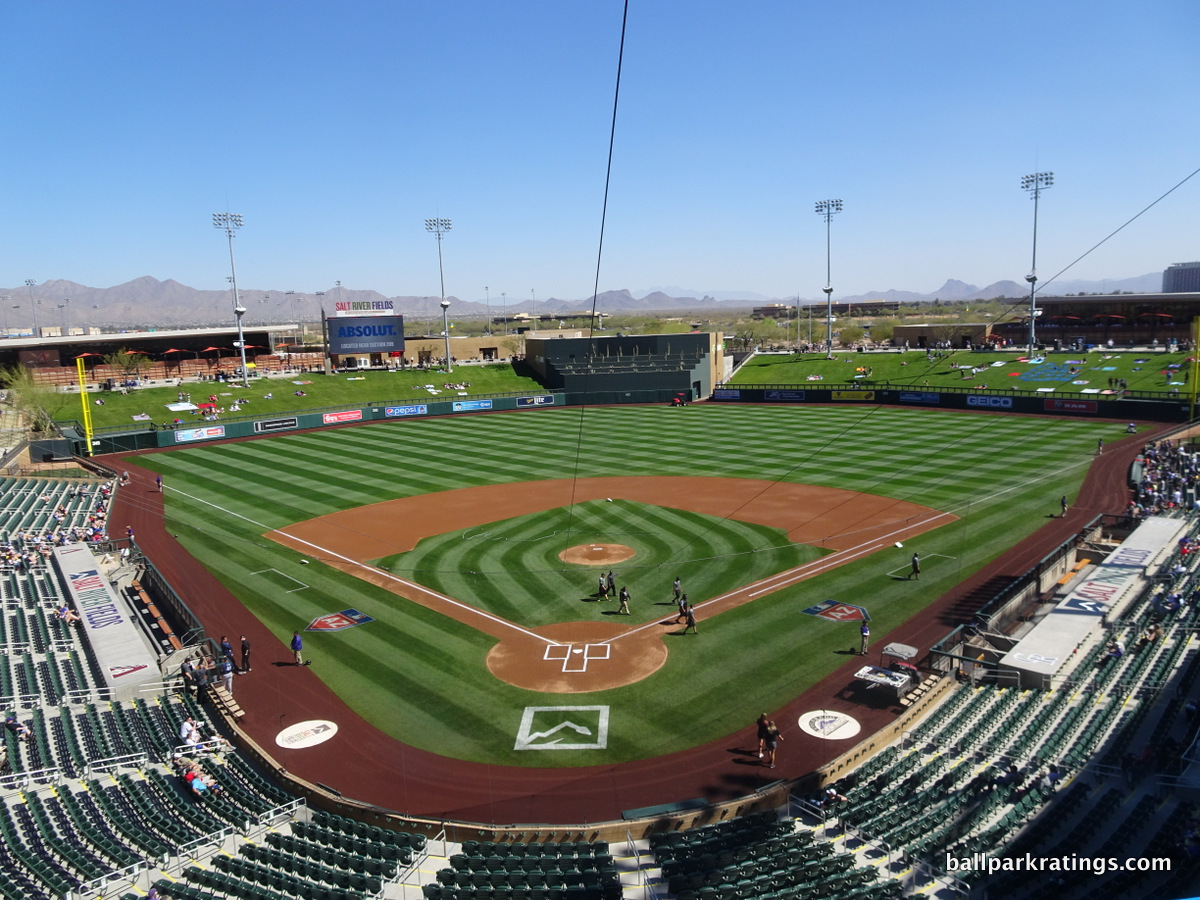 A long-form piece ranking, rating, and reviewing all spring training facilities has been released for 2020!.

It’s just so unique in sports to have a separate pre-season venue that is in many ways better for experiencing baseball than the primary venue.

Only in baseball do fans travel hundreds of miles to see their team in sold out venues at cheaper prices.  Baseball had the ingenuity to make it a win-win for fans, while basketball and football fans pay high prices at inappropriately scaled regular season venues for pre-season games.

Beyond the relatively high and renewed quality of the venues, spring training baseball is especially conducive to comparing teams and ballparks.

The piece starts with a lengthy preamble, which 1) explains why I do this, 2) illustrates the importance of the ballpark to the game of baseball, and 3) briefly outlines our criteria before diving into the rankings/ratings/analysis.

Part 2, which goes into the top tiers ending with the #1 park, is linked at the bottom of this page, Part 1.   Enjoy! 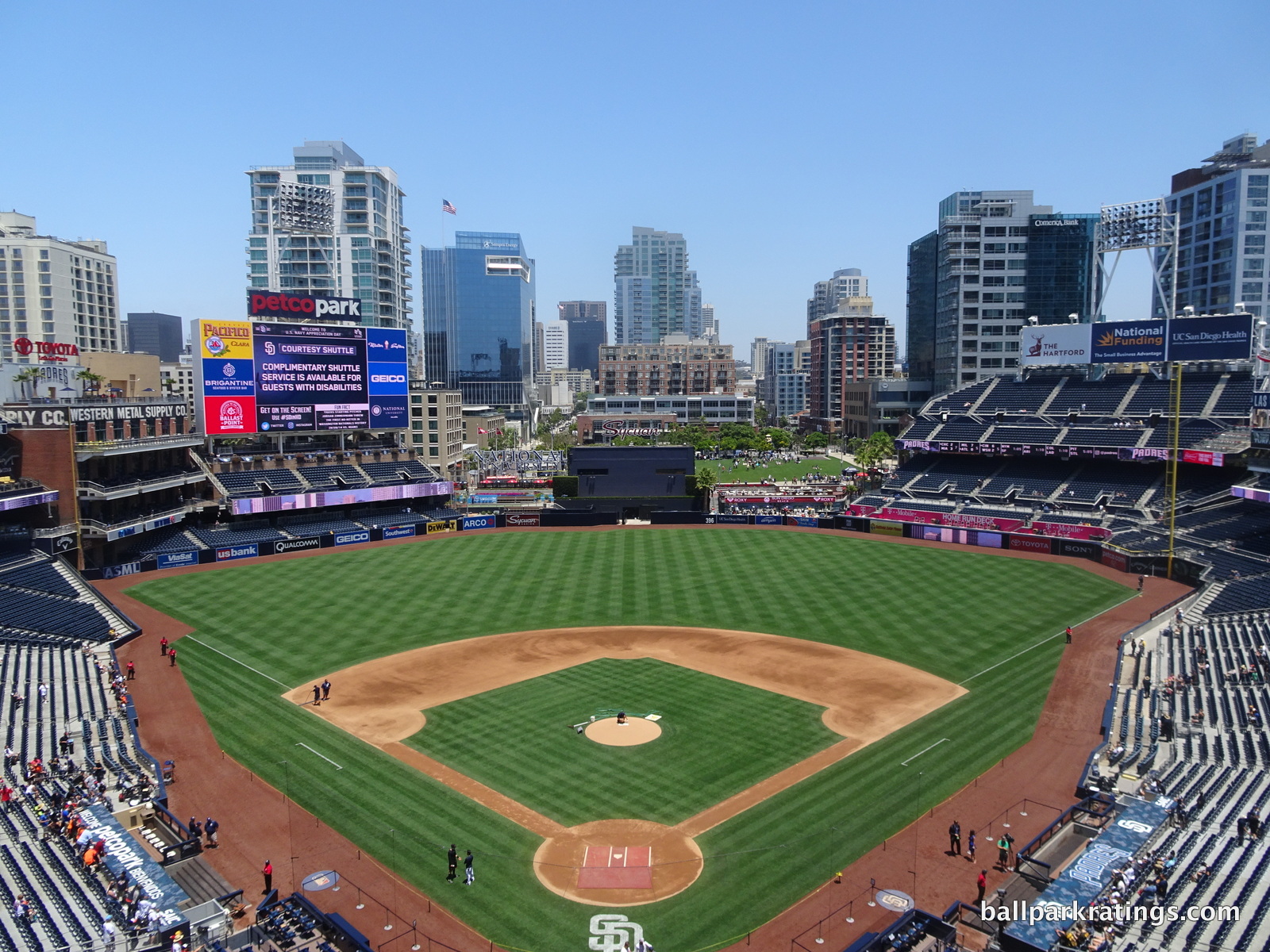 A new, in-depth review of Petco Park has been released, which we have as the best ballpark in baseball.  As usual, Wrigley, Fenway, and Dodger are excluded from that analysis.  We can have a conversation about the classics, and then we can talk about the other 27 ballparks in the majors.

In a long overdue effort to provide up-to-date content not specific to one ballpark review, I will be writing more blog style articles in 2019-2020 consisting of news, features, rankings, comparisons, special profiles, and more.  I’ve realized long 10-15,000 word in-depth reviews simply aren’t optimal for dispensing, consuming, and sharing information in today’s social media environment, although such long-form ballpark reviews will continue to be released for those who enjoy the depth of the analysis.   I hope you guys enjoy a more rapid stream of pithy and accessible original content this year. 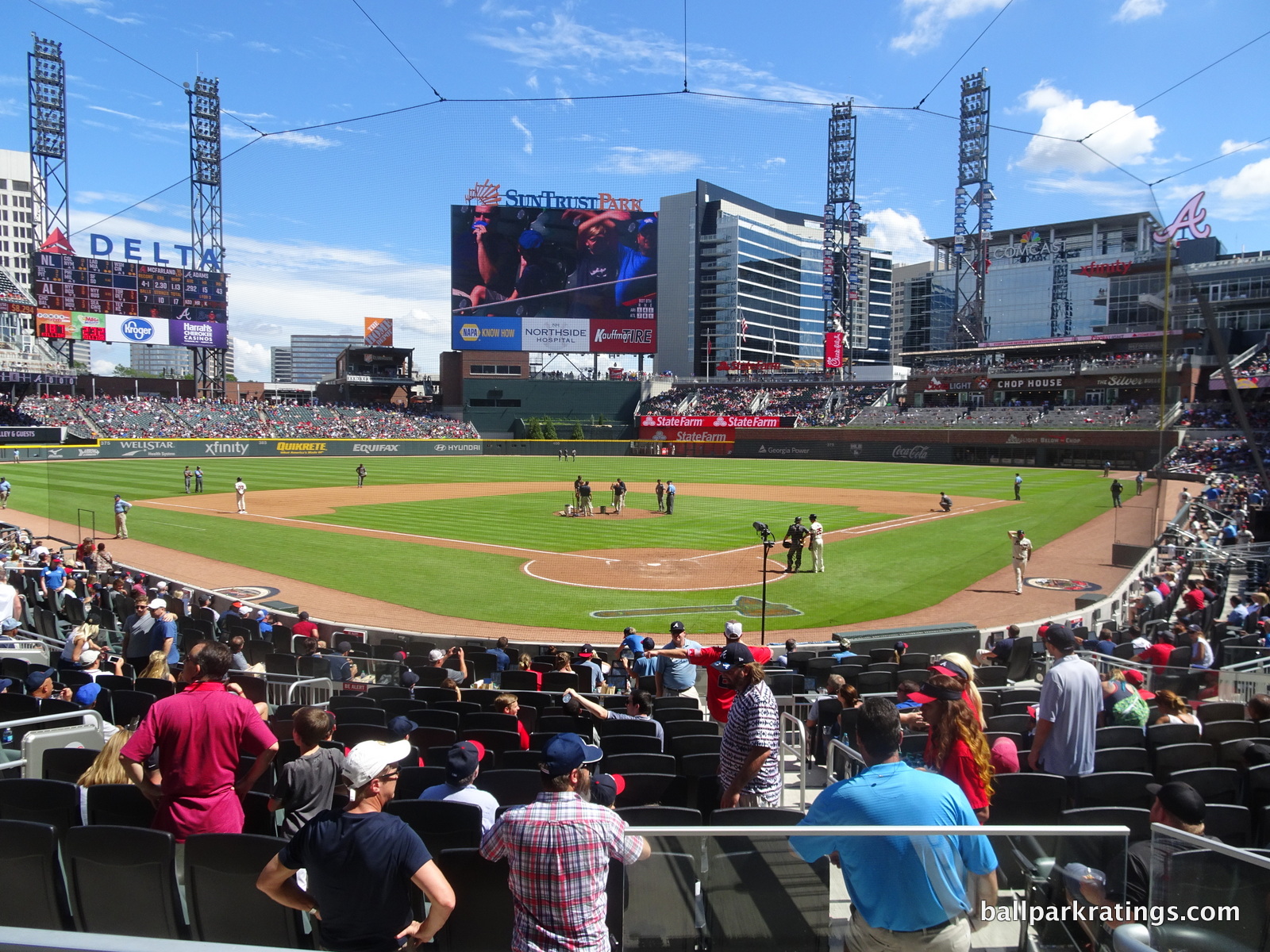 An in-depth review of the Atlanta Braves’ new SunTrust Park has been released! Clocking in at over 15,000 words, this is my longest review ever, and will be my longest and most comprehensive review for the foreseeable future (other upcoming reviews aren’t as long). Not only do I provide in-depth analysis of the setting, architecture & aesthetics, functionality, and amenities, but I also take time to discuss the three larger implications I see at SunTrust Park for the ballparks of the future.

We provided some much needed new content throughout 2017, and we plan to take that to the next level throughout 2018.  Much of the original content, especially the independent articles, date back from 2010 (written before website launch) to 2014.  2018 is a huge year for ballparks all across spring training and Major League Baseball, and we want ballparkratings.com to be a part of that.  I will be using the Facebook page for periodic updates and announcements relating to everything above.

Times change, and the ratings have been slightly altered for the first time since 2011:

I am excited for my 20th consecutive year of spring training!  After returning to the Cactus League last spring, we turn back to Florida with an ambitious schedule. We will cover a good amount of ground in Florida, starting in the Jupiter/Palm Beach area, then going all across the west side of the state before ending at the Disney complex near Orlando.

10 of 13 Grapefruit League venues will be visited this year. I will post profiles from past visits of the other 3.

Here is our tentative itinerary for the 2019 season:

Progressive Field, Petco Park, and Busch Stadium will be/have been rerated and re-reviewed!  These parks have undergone a lot of changes during the decade.

SunTrust Park has opened to generally positive reviews. Atlanta’s pad is seen as the model for ballpark mixed-use development, and it’s amenities will burst the scale in our ratings.  But it’s the only ballpark I can remember with so little spoken about its architecture and aesthetics upon opening, which is telling. Perhaps that no longer matters.

Minute Maid Park underwent the most significant renovations in major league baseball in 2017.  Tal’s Hill was removed, and a bevy of new amenities were added in and above its former location.  Most notable are three different bars, the addition of Shake Shake and Torchy’s Tacos, and the new centerfield group space.

Yankee Stadium added a number of fan friendly social spaces in the offseason.  New places to hang out were added in the outfield, main concourse, and the upper deck.  They also added a new kids area. The amenities were always great at Yankee Stadium, but they’ve now been democratized for all fans.

On the edge of McCovey Cove, the Giants ballpark has the best views in all of baseball.  While Camden Yards is generally seen as the poster child of the ballpark building boom, AT&T Park is the biggest success story of the era, constructed with private financing and generating a huge boost in attendance.  Like I said, no ballpark transformed a team and its fan base quite like this.  Once you couple these factors with transcendental water views and amazing amenities, you easily have one of the best ballparks in baseball.